It started in 2012 with a group of energetic volunteers headed up by Bob Gordon to build a blacksmith shop by moving an old farm shop to the Lorain County Fairgrounds.  It took about 2 years from laying the first sandstone foundation block to completion of the building. 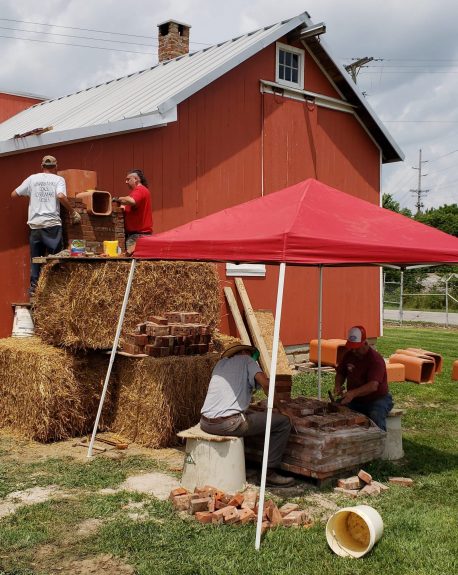 Many thanks to Greg Dugus for the chimney photos

A second chimney at the Blacksmith Shop was completed in time for demonstrations at the 2018 Fair.

This chimney was built to vent multiple items like a gas engine to run the line shaft, a stationary steam engine, another forge, or maybe another wood stove.  This is in preparation for the expansion of the shop. 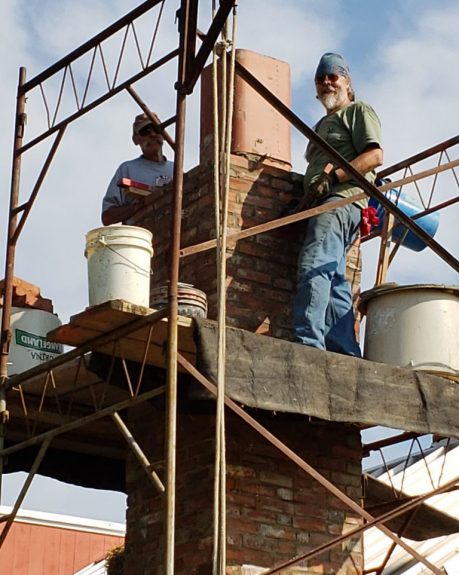 Our monthly Hammer-Ins have become so popular that a new forge was built and completed this month which will easily accommodate the work of 3 blacksmiths.  Also a rivet forge has been added to the 6″ flue in the new chimney for the work of another 2 blacksmiths.

The dates and times of the Hammer-Ins are posted on our Facebook page.  In the winter they are held on Sunday and start with a demonstration of a technique, a break for a potluck lunch, and then open forging till around 2:30PM. In the summer the Hammer-Ins are held in the evening during the week.

Plans are in the Works

A 16′ by 33′ addition is being planned to house early blacksmith and industrial machinery like the newly donated nail machine.